Members may submit maps to have displayed on this page to showcase their talents and share ideas amongst our Association members.  Please contact us at info@aagp.ca if you would like to contribute to the Map Gallery. 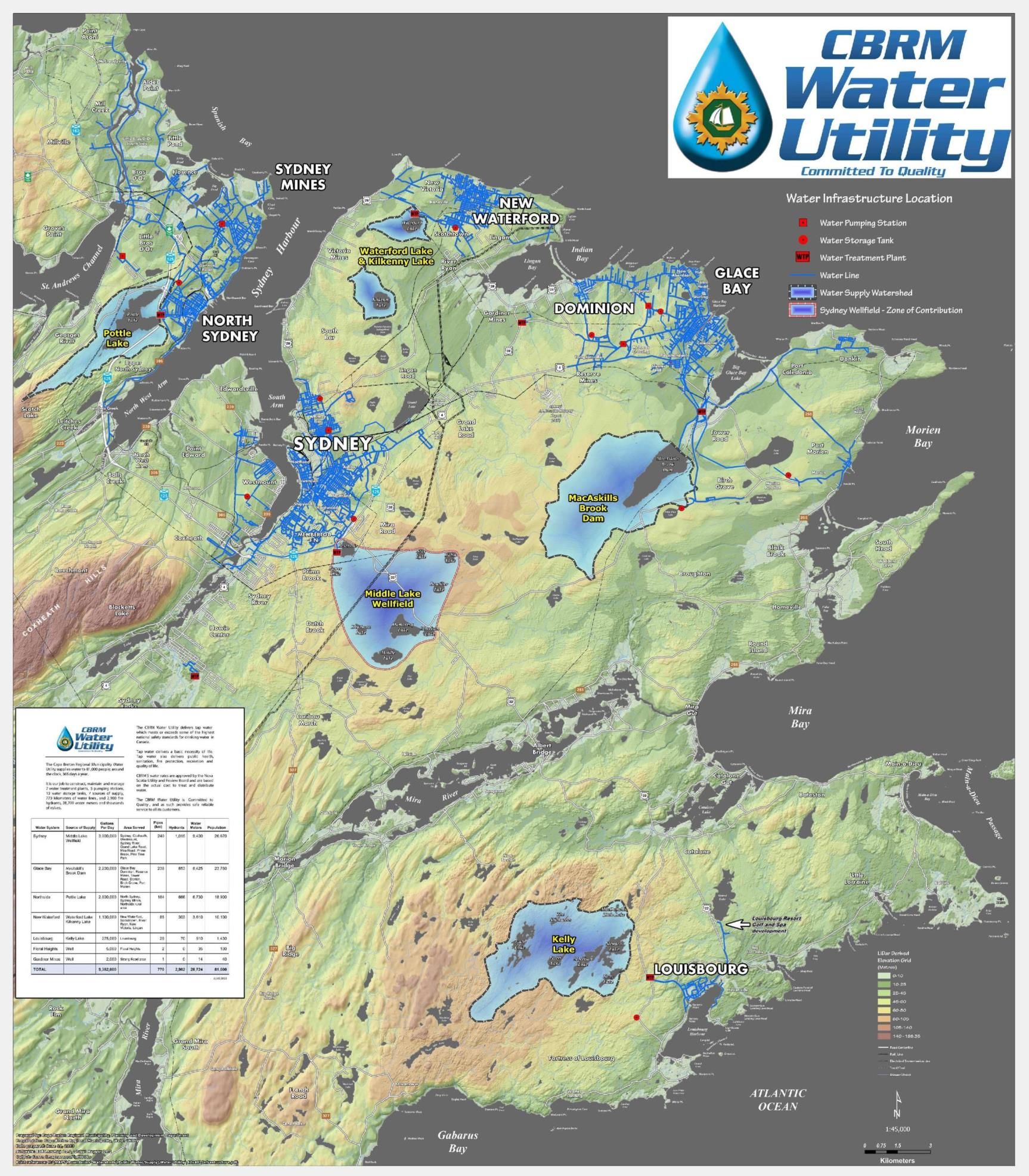 A request came from our Water Utility for a 42” x 48” map that illustrates the location of water infrastructure (water lines, treatment plants, pumping stations, storage tanks and water supply watersheds) in the municipality, as nothing existed in cartographic form. The CBRM Water Utility supplied information regarding the workings of the utility, and details for each water supply system. An elevation grid/hillshade was added, as well as the usual plethora of relevant spatial data. Copies of the map will be mounted and placed in the water treatment plants and will also be used by ACAP Cape Breton as a component of their mobile water conservation display.

This map illustrates a DEM for the Scatarie Island Wilderness area and adjacent islets. The surface was created from 30 million+ xyz points (csv) format, imported into Global Mapper and then exported as an asc GRID. The GRID was brought into Arcmap 10.1, a hillshade created (5 x vertical exaggeration), with the grid (25% transparency) draped over top. The NW portion of the map illustrates the location of the MV Miner wreck that has been in the news as of late. 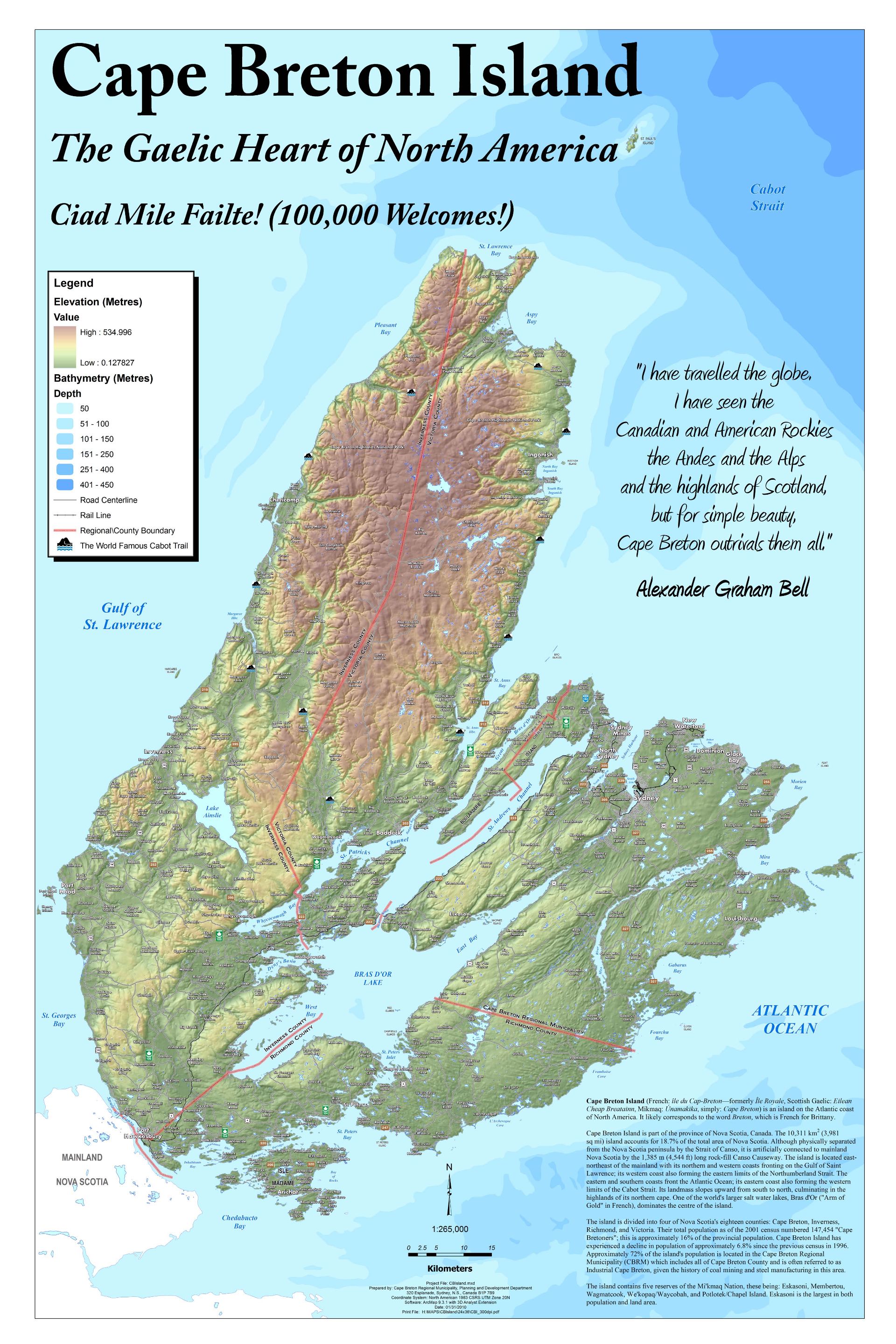 Our department had a requirement for an Arch D size, Cape Breton island map, with reference information, elevation grid and bathymetry, etc. The end product would be plaque mounted and placed on our boardroom wall. The elevation grid/hillshade was created from the provincial 10K DEM, via ESRI’s 3D Analyst. A variety of vector layers, pulled from both the provincial NSTB and our own departmental files were used. Descriptive text was added to enhance the final product. The map was originally exported as a 300 dpi tiff. Using Adobe PS, the tiff was exported to pdf. A reduced resolution version of the original is portrayed, here.

The CBRM has published this map to encourage cycling as a practical and healthy means of transportation and recreation. The Cycling Routes map displays some suggested paths for travelling around the larger communities of the Cape Breton Regional Municipality. Routes were broken down into several classifications to assist with trip planning, giving cyclists a general idea of traffic volumes and speed, paved or unpaved routes and the presence of bike lanes. The Scenic Routes map displays some suggested routes throughout the entire CBRM that cyclists may find of interest. Both maps include points of interest such as museums, theatres, boardwalks and arenas. 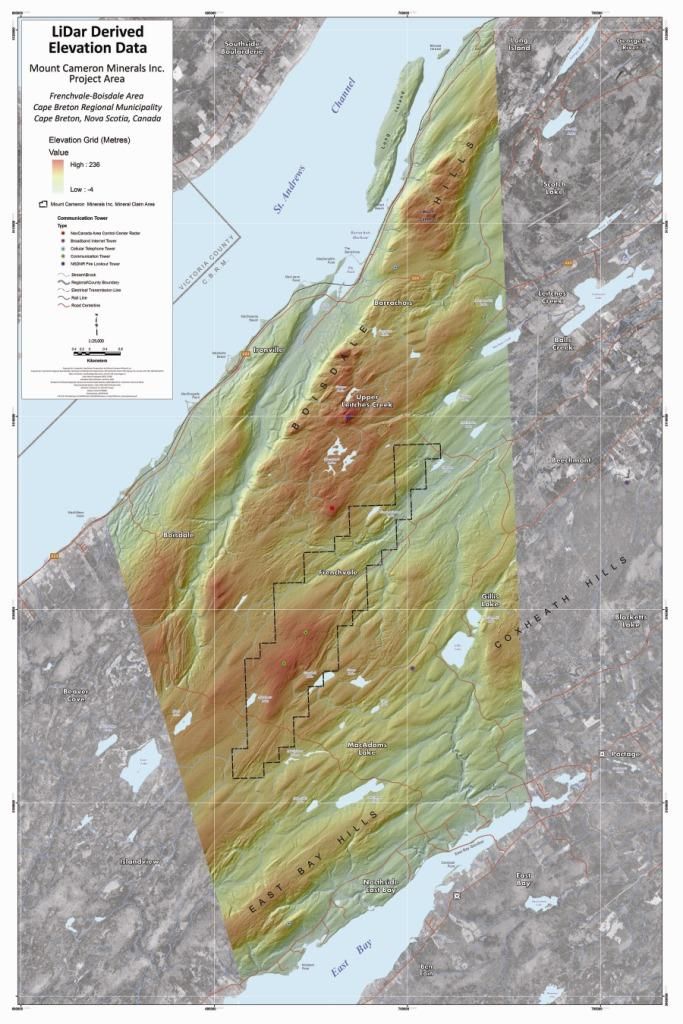 Rendered 1m DEM (hypsometric tint with a 50% transparency) draped over a hillshade for an eastern portion of the CBRM.  The map illustrates the NSDNR Mineral Claim Grid for a mining concern that is doing exploration work in that area.  For locations outside of the LiDar collection area, I used the SNS&MR Resource Series Ortho (60 cm. Res.), along with various poly/vector layers.  LiDar data was collected/processed by Leading Edge Geomatics, Fredericton, NB.  Collection took place in November of 2010. 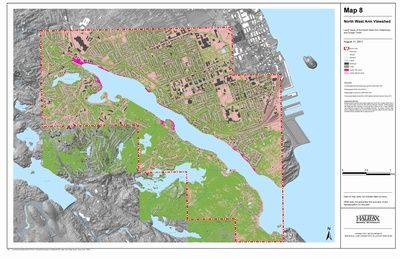 1m DEM derived from LiDAR was used as the land-surface topography. Building heights and forest cover heights were extracted from the LiDAR for all building footprints and areas identified to contain forest cover, respectively.  The buildings and forest cover locations with heights were combined with the 1m DEM to produce a DSM.  Using this information, all lands within the study area were analyzed to determine where water views of both the North West Arm  and Dingle Tower existed.